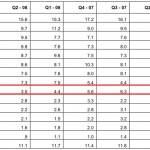 Q-94 FM is now CURVE 94.3 — “Winnipeg’s Pop Alternative”. The new radio station hit Winnipeg airwaves Friday morning at 8:45 a.m. The new launch is in hopes of regaining some market share, as the ratings for Q-94 have been anything but impressive in the latest standings. (see right)

“We’re absolutely thrilled to introduce CURVE 94.3 to Winnipeg,” said Andrew Long, Program Director, CURVE 94.3. “This station is a reflection of changing musical trends and we’re thrilled that Winnipeg is leading the charge for the Pop Alternative revolution.”

The new station is owned by the same company as Q-94, CHUM Radio, which is a division of CTVglobemedia, who also has such entities as CTV, TSN, the Globe and Mail and MuchMusic, and well as 35 radio stations and specialty TV channels across Canada.

Read the history of frequency 94.3 FM in Winnipeg over the years.