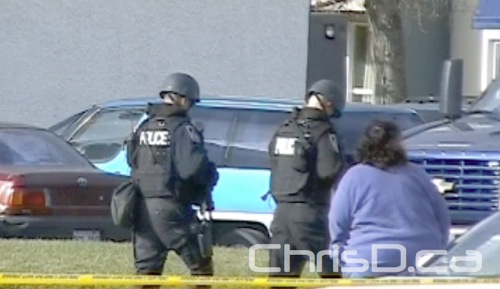 A 10-hour standoff and hostage situation has come to a peaceful end in Fort Richmond. Winnipeg police had a Manitoba Housing unit surrounded on Saturday as they investigated a male suspect barricaded inside with a possible weapon. The incident started around 6 a.m. on Newdale Avenue, just off of Pembina Highway in the city’s sound end.

Const. Jason Michalyshen briefed the media shortly after 11 a.m. stating the suspect inside appeared to be ‘distraught’. All residents in adjacent suites were asked to evacuate, or stay inside, as members of the Winnipeg Police Tactical Response Unit and negotiators worked with the suspect.

At approximately 4:15 p.m., two children were released from the complex into the arms of waiting officers. Shortly after the childrens’ release, three Winnipeg police officers armed with rifles entered the suite on Newdale Avenue and placed the 32-year-old male suspect into custody. The man’s pregnant girlfriend was also being held in the suite, and suffered minor injuries after being assaulted.

UPDATE: Charges have now been laid in this incident.

Watch video of the initial police response below.