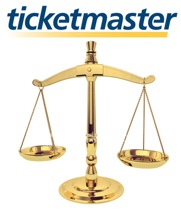 A Winnipeg woman has filed a class action lawsuit against Ticketmaster claiming they broke the law when it comes to fair ticket sales in the province. The suit specifically points out Section 60 of Manitoba’s Amusement Act, which states that no person shall sell, barter or exchange any ticket higher than its paid value.

In the lawsuit, filed February 17, 2009 in Manitoba Court of Queen’s Bench, Katherine Labossiere, along with her daughter, claim that they attempted to purchase tickets to Carrie Underwood’s December 2, 2008 concert at the MTS Centre. The Plaintiff’s daughter had obtained a “pre-sale password” from a local radio station and then tried to use it to purchase tickets on Ticketmaster’s website. Those attempts failed, because each time she tried to get tickets, she was referred to TicketsNow, a website owned by Ticketmaster that sells the same tickets at a higher price.

TicketsNow brought up the following information for Carrie Underwood’s concert: “Row 2, $193.” Believing that $193 was reasonable for four tickets, Labossiere’s daughter (a minor) completed the transaction using her mother’s credit card. After the transaction, the amount of $917.75, including “service charges” and a “delivery charge” was placed on the credit card. All attempts to get TicketsNow to reverse the ludicrous charges failed.

When Labossiere received her credit card statement, she realized that she was also charged in U.S. currency, and after conversion to Canadian currency the total charge was $1010.05, resulting in an overcharge of $195.50 per ticket. The face value price of each ticket was $57.00.

Similar lawsuits regarding Ticketmaster’s TicketsNow website have also been launched in Alberta and Ontario this week.

The class action is commenced on behalf of all persons who purchased tickets for an event in Manitoba through TicketsNow from and after February 17, 2007. For more information visit www.ticketmasterclassaction.com.

UPDATE: 10:15 a.m. CST – ChrisD.ca just received a copy of the Statement of Claim. The Plaintiff outlines that damages must be paid for the conspiracy of the Defendants to all Class Action members who endured the overcharge of tickets. The suit also lists punitive damages, as seen below. The value on these claims was not directly outlined and has yet to be determined.