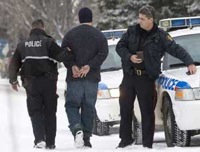 If you thought Winnipeg was the most likely place to become a victim of crime, you were almost right.

Saskatoon, followed by Winnipeg and Regina, is the most dangerous city in Canada, according to a recent survey by Maclean’s magazine.

Maclean’s gave Saskatoon an overall crime score of 163.23 “as a percentage difference from the national rate.”

Maclean’s obtained annual crime data from Statistics Canada for municipal police services with the 100 largest populations in the nation. Using 2007 rates per 100,000 population for six crimes — homicide, sexual assault, aggravated assault, vehicle theft, robbery plus breaking and entering — Maclean’s calculated the percentage difference from the national rate for each of the six crimes, according to its website.

via MontrealGazette.com
Image credit: The StarPhoenix