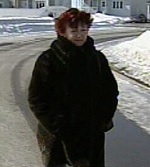 A 67-year-old Quebec woman is finally breathing a sigh of relief after being considered dead by the Canada Revenue Agency.

Marie-Therese Coulombe received a letter from the CRA addressed to her estate informing her that she would no longer receive GST credit cheques. Coulombe made several phone calls to inquire about the letter, but was told by a representative that they could only speak to the executor of the estate. Coulombe said, “There is no estate! I’m on the phone with you!”

After making 30 calls and getting on the front page of a Quebec newspaper, a spokesperson for the CRA explained what may have happened. Someone with a similar Social Insurance Number passed away, and an employee updated Coulombe’s file instead.

The CRA said the problem should be fixed within a few weeks.

— With files from The Canadian Press
Image credit: CTV