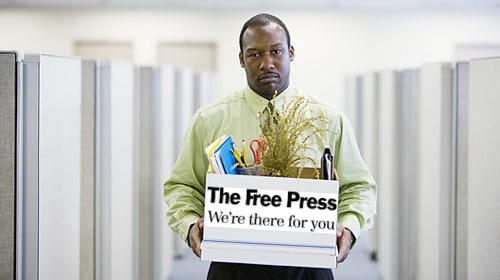 After a first round of layoffs earlier this year, the Winnipeg Free Press has slashed another five positions.

The layoffs include three newsroom employees, including police reporter James Turner, and two technical maintenance employees who work on the newspaper’s presses.

Winnipeg’s only bow-tie-wearing reporter was among the casualties. City hall reporter Joe Paraskevas, who made headlines himself a few years ago after being hit by a vehicle while riding his bike, was also let go.

Free Press publisher Bob Cox said that layoffs are trying to be kept to a minimum.

Layoffs seem to be the latest trend in the newspaper industry with the slumping economy. Just last week, Rocky Mountain News ceased operations after almost 150 years in business.