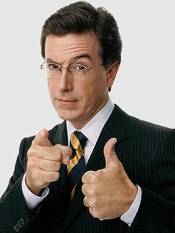 Voting closes on March 20 and NASA has an out if they don’t want Colbert’s name used. Its contest rules say voting results “are not binding on NASA and NASA reserves the right to ultimately select a name” in keeping with its best interests.

Colbert will make it to the space station one way or another. Last September, Comedy Central said it will digitize the comedian’s DNA and send it to the International Space Station.

— With files from CBC News