Home » News » Wasylycia-Leis: Cut the GST on Women Only Items

Wasylycia-Leis: Cut the GST on Women Only Items 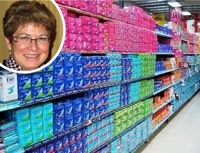 Winnipeg North MP Judy Wasylycia-Leis has introduced a bill in Parliament to help out women everywhere. She wants the Goods and Services Tax eliminated on feminine hygiene products.

“It unfairly disadvantages women financially solely because of our reproductive role. Bill C-341 restores fairness to the benefit of all Canadian women, particularly those on lower incomes,” adds the NDP MP.

Many provinces don’t tax these products at all, but the federal government still penalizes women by an estimated $69 million per year she says.

“Before getting elected, the Conservatives promised to get rid of this unfair gender-tax, but after three years in power Stephen Harper’s government has again failed to deliver for Canadian women,” said Wasylycia-Leis.

— With files from CTV News