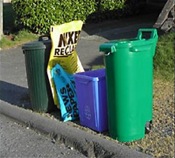 The City spent a good portion of the day on Thursday discussing changing the name of Garbage Day to Recycling Day. The issue was raised after a Winnipeg Transit bus driver, Don Woodstock, brought the issue to two city councillors.

The EPC (Executive Policy Committee) has moved to recommend the name be changed. If it passes a vote by city council, it will become official. At this point, it seems very likely the name change will take place.

I’ve been monitoring Twitter feeds over the past few days and the majority of people feel that even talking about this topic is a waste of time, especially at City Hall. As one Winnipegger wrote, “This is how Sam Katz occupies his day… talking about what to call it when you put your trash outside? Give me a break! Deal with some real issues.”

WinnipegFreePress.com did a poll on Thursday and asked readers which name they prefer. More than half chose what is currently known as Garbage Day.