Rock on the Range Comes to Canad Inns Stadium 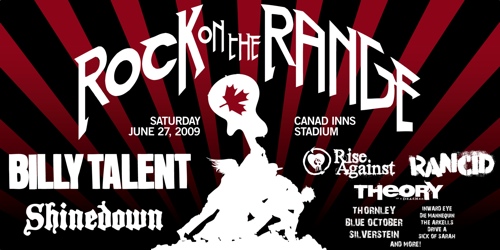 America’s premiere rock festival is making its Canadian debut in Winnipeg this summer. Rock on the Range will take over the Canad Inns Stadium on Saturday, June 27.

Performances from some of rock’s biggest artists around the world are slated to perform, including Billy Talent, Rise Against, Rancid, Theory of a Deadman, Inward Eye, Blue October, Thornley, Shinedown and many more. This show marks the first major rock festival in Winnipeg in over a decade.

Tickets for Rock on the Range go on sale Saturday, March 28 at 11:00 a.m. through RockOnTheRangeCanada.com and Ticketmaster.ca. Ticket prices are $59.50.

You can get your tickets early by entering the presale password FESTER beginning tomorrow, Saturday, March 21 at 10.m. until Wednesday, March 25 at 10 p.m. This password will not only get you the tickets in advance, but they will be much cheaper.