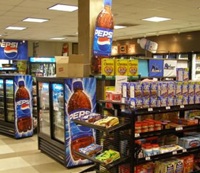 A British store owner has come up with a new way to curb litter in her village and has already seen a 40 percent drop.

Yvonne Froud, 52, said she uses a black permanent marker to write the names of buyers on candy wrappers, bags of chips and beverage containers to identify the litterbugs of Joys Green, England.

Those children who litter anyway face penalties, including temporary bans from Froud’s store and periods of litter-picking duty.

“I was so disgusted by the litter I had to do something about it,” the shopkeeper told The Daily Mail. “Now if we find packets around the village we know who they belong to. I will do it with adults if they start littering, too.”

This may not work in Winnipeg, but perhaps in smaller communities. I like the idea.

via The Daily Mail