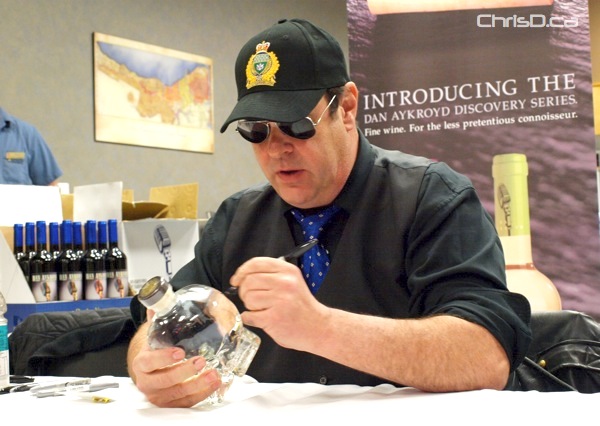 About 500 people lined up to see Canadian actor and funny man Dan Aykroyd Monday afternoon. The comedian and entrepreneur is in town promoting his own self-titled wine line at three Manitoba Liquor Mart locations. He also made quite a few bubbly sales of his Patron tequila and Crystal Head vodka.

I caught up with Aykroyd at the Grant Park location, where he signed autographs of various movie memorabilia for fans, including some Blues Brothers items. For those Ghostbusters fans, you’ll be happy to know a third installment is in the works and should begin production in the fall, with a release date sometime in the summer of 2010.

Aykroyd was very animated and enthused to greet those who waited in line patiently to see him. Earlier in the day he did a signing at Madison Square, where he stayed well beyond his scheduled time slot to make sure nobody missed out.

Shaw TV’s Kim Babij was also on hand and got a chance to interview Aykroyd. Watch for her segment to appear shortly on channel 9.

If you missed out on Monday, there is one last signing today at the Cityplace Liquor Mart from 11 a.m. to 1 p.m.