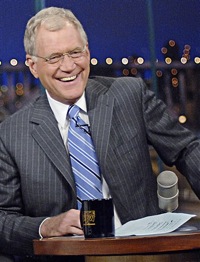 The couple wed on March 19 at the Teton County Courthouse in Choteau, Montana to the surprise of almost everybody, as Letterman has repeatedly put off the idea of marriage after his rocky divorce decades ago.

The road to the ceremony also wasn’t smooth, he told the audience. He, Lasko and their six-year-old son, Harry, were on their way to the courthouse Thursday when their pickup truck got stuck in the mud.

“So now we think, ‘Well, somebody’ll come.’ No, nobody comes along. Nobody comes along — it’s Thursday afternoon; who’s coming along? Zorro? No, nobody. So I get out of the truck and I walk 2 miles back to the house into a 50-mile-an-hour wind,” Letterman said.