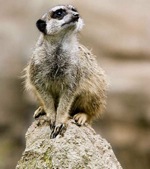 The Assiniboine Park Zoo‘s Meerkats have finally formed a compatible group after repeated introductory attempts. Meerkats are known for being notoriously difficult when it comes to adding new individuals into an established group. In October 2008, the Zoo brought in five females from Lowry Park Zoo in Tampa, Florida, to join three lonely bachelor males in Winnipeg.

During eight weeks of growling and squabbling, two females and one male were ejected from the new group. The compatible individuals (two males and three females) are back on display in the Kinsmen Discovery Center. Mating has been observed and young may be produced later this spring. When that happens, offspring will be sent to other Canadian facilities.

Meerkats are no stranger to Winnipeg, as the Zoo first imported the species in 1988, but needed to acquire unrelated individuals to keep the colony going. The Meerkat is a small diurnal herpestid (mongoose) weighing on average about 731 grams (1.61 pounds) for males and 720 grams (1.58 pounds) for females.

Meerkats can live up to 20 years in captivity.