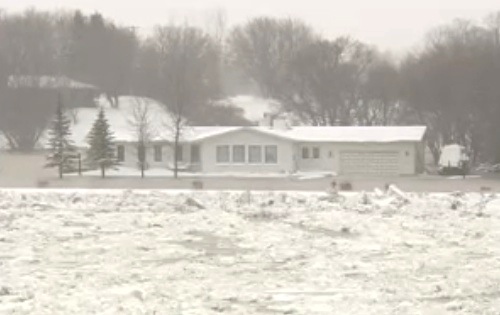 The rural Manitoba municipality of St. Andrews is calling out for volunteers to help with sandbagging efforts. If you can help, you’re urged to go to the south fire hall at Main Street and Donald Road in St. Andrews, or by calling (204) 481-0739.

On Wednesday, at least 40 homes were evacuated in St. Andrews near River Road. About 10 of those homes have already been flooded. Later in the day, East St. Paul, West St. Paul and St. Clements declared a state of emergency. The issue causing this sudden flooding is ice jamming on the Red River north of Winnipeg. “The jam is still there and the water is still coming up, so we’re making preparations for in the neighbourhood of hundreds of homes that we’re going to have to try and protect or evacuate,” said emergency measures co-coordinator Paul Guyader.

By early Thursday, the massive ice jam south of Lockport had broken and the Red River in the area was dropping. The water level had dropped about a metre almost immediately.

Rural Municipality of St. Andrews:
Officials have declared a state of local emergency and report flooding along River Road from Lockport to Larters Golf Course due to the ice jamming on River Road. Evacuations of low areas are taking place. The RM is hauling gravel to River Road to use as a dike. The South Fire Hall is now the emergency operations and reception centre and a provincial sand bag machine is running on site providing bags to St. Clements, St. Andrews and West St. Paul.

RM of West St. Paul:
Officials have upgraded to a local state of emergency and are advising residents along the river to protect their properties immediately. The province has sent 9,000 ft. of water diking to be deployed by the municipality in the highest priority areas of Baldock and Kenabeek streets. Sandbags are available at the West St. Paul Recreation Centre as well as at the South Fire Hall on Main Street at Donald Road in the RM of St. Andrews.

RM of East St. Paul:
Due to the ice jamming at Captain Kennedy House on River Road, water began backing up and the RM of East St. Paul has declared a state of local emergency and opened up its emergency operations centre. A door-to-door notification began at 7 p.m. to notify residents of rapidly rising water and the possibility they may have to evacuate should the water continue to rise.

RM of St. Clements:
The RM has opened its emergency operations centre, has declared a state of local emergency and is issuing sand bags to residents upon request. Sand bags are available at the RM office as well as at the South Fire Hall on Main Street and Donald Road in St. Andrews.

The province will continue to support all local efforts to ensure safety of residents and protect homes and businesses. A second sandbag machine and 100,000 sandbags have been dispatched to the area. Approximately 9,000 feet of water barrier (tube diking) has been deployed to the highest-priority areas.

Meanwhile, south of the border in North Dakota, the entire state has been declared a federal disaster zone by President Barack Obama. Demolition crews are using explosives to blast away ice jams in the Missouri River that threatens the community of Bismarck, ND. Hovercraft were also being used to rescue stranded homeowners from the rapidly rising Red River.

— With files from CBC News, The Canadian Press and Province of Manitoba
Image credit: Global News