Firefighters Battle Blaze at U of M’s Duff Roblin Bldg. 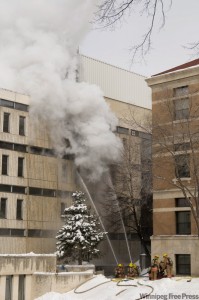 Emergency officials evacuated parts of the University of Manitoba Fort Garry campus Saturday afternoon after an electrical fire broke out in the Duff Roblin Building on Dysart Road. The building houses the Psychology Department and zoology labs.

Flames were seen shooting out from one of the upper floors beginning at around noon.

“We’ve basically got 20 pieces of apparatus at the fire right now, which is approximately 75-80 firefighters,” said Stephen Sumka, fire platoon chief. A hazardous materials crew was also on scene.

Damage to the building is estimated at $2 million.