Highway 75 to Close Tuesday at Noon 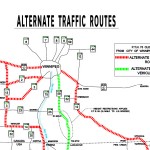 Motorists who travel from Winnipeg to Morris on Highway 75 will need to find an alternate route by tomorrow. The province will be temporarily closing a large stretch of the highway south of the city to Highway 14 at noon on Tuesday. Click the map to the right to see alternate travel routes.

Manitoba Water Stewardship says several highway closures are needed to allow communities south of the Perimeter to seal up their ring dikes.

Highway 200 will also be closed, which runs north/south between Ste. Agathe and Dominion City.

As for alternative routes, the province suggests motorists use Highway 59 to head south. For commercial vehicles, such as semis, you will have to take Highway 3 from Winnipeg and then head back toward Highway 14 to Highway 75

Highway 75 will remain open south from the intersection at Highway 14.