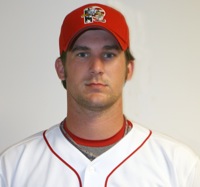 The Winnipeg Goldeyes added three more players to their roster on Monday. Manager Rick Forney announced the signings of Daniel Haigwood (right), Dan DeLucia (de-loosha) and Matt Spade. There are now 23 players on the pre-season roster, 13 of whom are pitchers. These new additions join other lefties, Zach Baldwin and Aaron Odom, already on the team.

Haigwood, 25, arrives after beginning the spring in big league camp with the Pirates. Spending the majority of his career at the AA level, he is 41-26 over six seasons with a 3.65 earned run average, fanning 627 in 621-plus innings.

DeLucia, 23, has a year under his belt in the Tigers system. In 15 appearances (three starts) last season, he went 2-2 with a tiny 1.95 ERA and an equally tiny .210 opposition average.