Man Dies After Jumping from U of W Residence Building 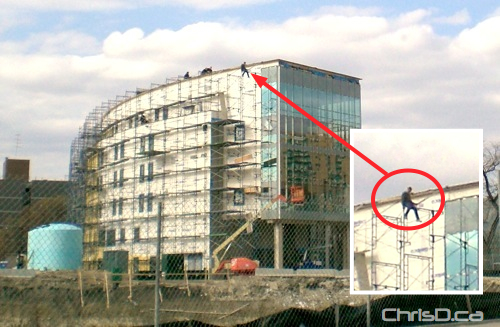 A man who had been keeping police officers at bay for most of Sunday after climbing on to scaffolding downtown has died. The 23-year-old jumped six stories with his arms out, according to Free Press crime reporter Mike McIntyre (via Twitter). ChrisD.ca obtained the photo above which shows the man, along with officers nearby, minutes before he jumped.

It happened at McFeetors Hall, a new student residence being constructed for the University of Winnipeg at Portage Avenue and Langside Street, CJOB reported.

The man spent eight hours on the building, dismantling it to keep police from reaching him. He gained entry to the construction site at approximately 11 a.m.

Police negotiators and the man’s family were brought in to try and talk him down, but efforts were unsuccessful.

The man jumped from the building at 6:10 pm. He was taken to hospital in critical condition, where he succumbed to his injuries just over an hour later. Winnipeg Police say the man had seen a doctor the day before to address mental issues, but was not treated. He lived across the street from the construction site at 399 Furby Street.

CTV News first reported on this story during their 6 p.m. newscast, but did not follow up with the fact that he had since jumped and died when they went to air at 11:30 p.m. The story was also removed from their website. Most media outlets do not report on suicides. 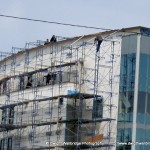