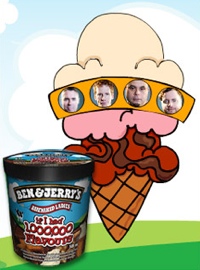 Ben & Jerry’s turned to Twitter when it was time to decide on a new flavour to add to their ice cream lineup.

The company created a complete social media campaign that saw six “flavours” anxiously tweeting about whether or not they would be part of the new ice cream. Each flavour had a different personality and enlisted the help of their followers to support their cause.

In the end, the new flavour chosen was “If I Had a Million Dollars,” named after the popular ’90s Barenaked Ladies song. All proceeds from the sale of the new flavour will go to support ABC Canada Literacy Foundation.

Canadians can also take part in the buzz by “flavourizing” themselves by uploading their portrait to IfIHadAMillionFlavours.com for a chance to win a year’s supply of the new ice cream and attend a Barenaked Ladies concert as VIPs.