Update on Google’s Presence in Manitoba 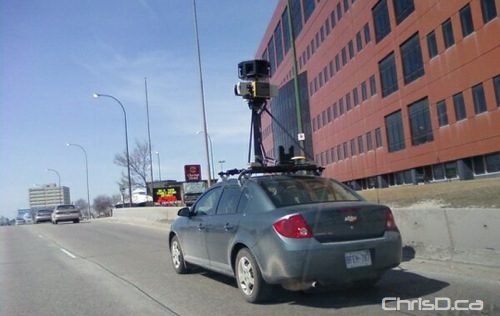 Many of you have shown an interest in knowing the whereabouts of the Google Street View vehicle since it made itself known a few months ago.

Thanks to several tips, I can tell you the car(s) are still in the province. On Monday one of them was spotted on Highway 8 north of the Perimeter.

On Tuesday I received an e-mail from someone living in the Portage la Prairie area who said they saw it driving down one of their residential streets.

There’s no word from Google yet as to when their job in Manitoba will be complete, but it looks like they’re covering a lot of ground. It will be interesting to see how everything turns out once the images show up on Google Maps.

If you see the car in the photo above, send an e-mail and let us know where you saw it. Take photos too, but be careful if you’re doing so while driving yourself.

In other Google related news, Greece and Japan have been giving the company a hard time over the Street View car citing privacy concerns. Understandable.