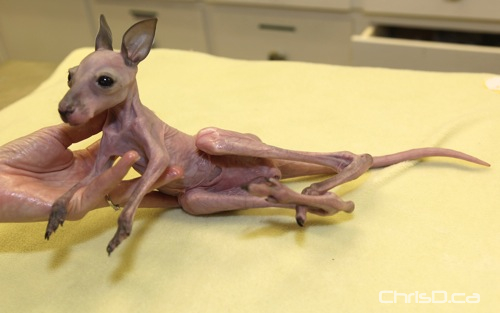 A four-month old female joey, one of Nature’s most bizarre-looking creatures, is being kept alive at the Assiniboine Park Zoo these days. The baby Red Kangaroo, which was named Rooby, weighs only 560 grams and was found lying helpless on the floor of the enclosure after being ejected from the pouch of one of the adult females.

It’s very rare for baby kangaroos to survive out of the pouch at this early age, since they are dependent on their mother’s milk inside the pouch for up to a year. The Zoo says feeding the baby milk formula every three hours improves the chances of survival.

Like most baby animals, she spends a lot of the time sleeping soundly. The first weeks are very critical for her survival, but if the youngster makes it through, she will need zookeeper care for another eight months.

The life expectancy of the species may be up to 25 years and makes a fascinating zoo exhibit due to its unusual appearance and bounding gait on its powerful hind legs. Surprisingly, the species is blind at birth.

Due to its delicate health, the baby kangaroo is not available for public viewing.

— With files from a news release
Handout photo