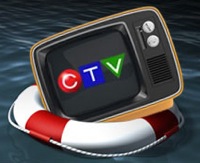 After last week’s post on saving local television, the subject has heated up tremendously among the blogosphere and Twitterverse. ChrisD.ca has received dozens of e-mails from readers sharing their comments. While most of them are of a serious, concerned nature, one of them includes this amusing line, “Gord and Maralee care too much about Winnipeg to let CTV fail. Even if it goes down, they would probably stream live to the Web from Gord’s front lawn.” Not a bad idea… the live streaming part — not quite sure about the backdrop.

I’d like to draw your attention to a particular blog post I received on Twitter from my friend Dave Shorr. Kelly Toughill of The Canadian Journalist Project listed five possible options to remedy the financial woes of broadcasters in an article on Saturday.

“There are five options: let conventional television networks wither and perhaps die; offer some form of government subsidy; force cable companies to share their profits with broadcasters; force consumers to pay more; or force the big networks to use profits from their new specialty channels to subsidize their own conventional television operations,” writes Toughill.

While none of those options are favourites of mine, I do like the idea of modelling what the U.S. has done, as does Shaw president Peter Bissonette. He points out in the article that cable companies in the U.S. aren’t forced to carry anything. They negotiate the fees and can reject a channel if the price isn’t right, which would explain why some networks pay more or less based on their programming.

If the article wasn’t enough for you, Darrin Harvey of NewCap Radio in Halifax posted a note on his Facebook profile Sunday night, as seen below. 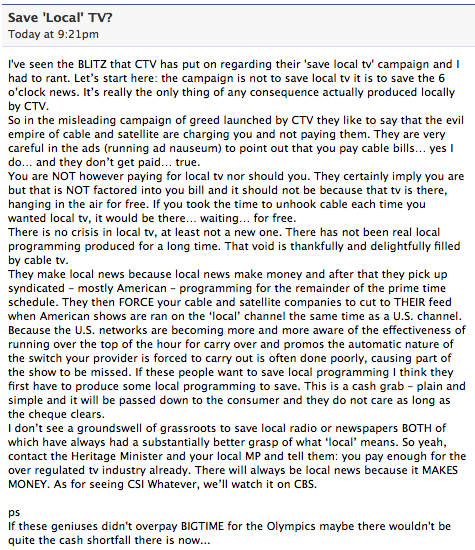 This topic is just heating up and will only gain more momentum when other broadcasters begin following CTV’s lead in generating public awareness of the issue. How successful those efforts will be is anyone’s guess.