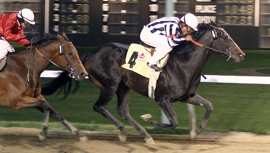 If you’re not heading to the Goldeyes home opener tonight, there’s plenty of action happening at Assiniboia Downs. The Manitoba-bred 3-year-olds will be stepping up to take on older horses in open company. The young ones better do well, as their 2009 season will depend on it.

Considered the best two 3-year-old Manitoba-bred geldings of 2008, Spying Eyes and Eight By Ten shone in their category. Spying Eyes beat Eight by Ten in the J. W. Sifton Memorial but in the Agassiz Stakes against older horses, Eight by Ten finished second and Spying Eyes finished fourth.

Eight By Ten, owned and bred by Dr. Betty Hughes and trained by Lise Pruitt, was the 2007 Manitoba-bred horse of the year, having won the CTHS Sales Stakes and the Buffalo. He spent most of his 3-year-old year running in open company with mediocre success. But against Manitoba-breds he had two seconds: in the Agassiz and the Sifton.

With only one stakes race for older horses in the restricted ranks against other Manitoba-breds, the Agassiz Stakes, both Spying Eyes and Eight By Ten will have to keep their heads above water in the deep end this year.

← Previous: Cops Shaving Heads for Cancer Next: Over 200 Teams Ready to 'Play On!' →
Tags: Assiniboia Downs