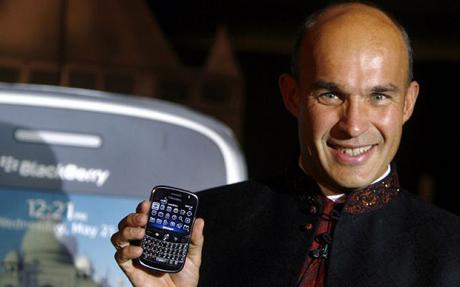 The Co-CEO at Research in Motion (RIM), the maker of the world renowned BlackBerry, will speak to students and faculty tomorrow at the University of Manitoba’s Drake Centre at 10 a.m.

Jim Balsillie, who has been in the spotlight recently by trying to move an NHL team to Ontario, will be accepting the 2009 International Distinguished Entrepreneur Award (I.D.E.A.) honouring internationally-renowned entrepreneurs.

Later in the day, Balsillie will attend a black-tie dinner, hosted by the Asper School of Business at the Winnipeg Convention Centre.

UPDATE: 11:10 a.m. — As expected, Balsillie did not discuss his intentions to buy the Phoenix Coyotes. Although asked multiple times, he dodged the questions and only said he played some pick-up hockey last night.