Local Pet Shelter Owner Gets the Shaft from Hotel Chain 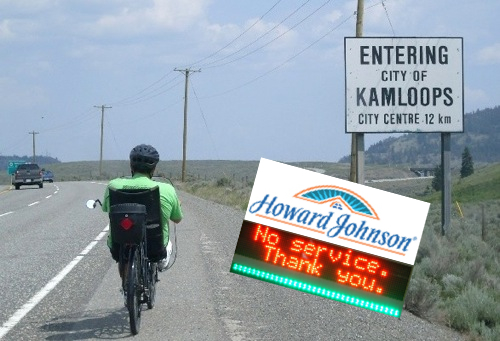 D’Arcy Johnston, owner of Winnipeg pet shelter D’Arcy’s ARC, is biking from Vancouver to Winnipeg to raise $25,000 for his animals. He began the journey on June 1, but apparently ran into a little trouble with the Howard Johnson hotel in Kamloops, BC.

On Friday, D’Arcy took to his blog and wrote…

Rolled into Kamloops around 3PM and we found out the Howard Johnson Downtown (530 Columbia St., Kamloops, BC) did not book us a room. Although I did fail to confirm our reservation, when we contacted them they claimed to have rooms available but chose not to provide us a complimentary room as agreed upon in an email by their General Manager. Therefore, we had to find a different room and actually pay for it. For those of you who want to help, I recommend going online and emailing the Howard Johnson Downtown and voicing your concern(s) for the lack of charity involvement. When I get back to Winnipeg, I do plan on lodging a complaint to the Howard Johnson Head Office.

That’s not good publicity for Howard Johnson at all. The manager didn’t return our call when we reached out to see what’s up. ChrisD.ca’s Sarah Klein also sent an e-mail to the hotel’s public relations department, and has yet to receive a response.