Home » Columns » 3.1% of Asians Are Not Ready for DTV Transition

3.1% of Asians Are Not Ready for DTV Transition

Pardon the obvious poor choice of a title, but that’s how the Nielsen Company is measuring what percentage of Americans are not ready for the DTV transition on Friday. They have categorized households into race in a new chart released yesterday to show how many homes will see white static by tomorrow — approximately $2.8 million. 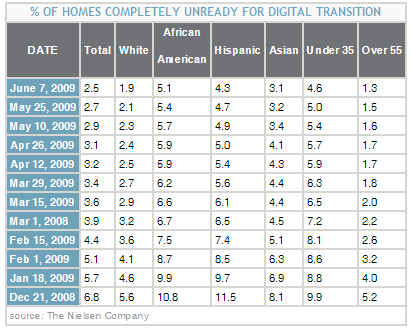 The DTV transition means broadcasters will switch from carrying an analog signal over to a digital signal. Televisions in Canada won’t be affected by this, as our transition takes place August 31, 2011.

It’s just a little odd to see these categories broken down by skin colour. The general consensus when I asked for feedback on Twitter shared the same opinion.

Let’s just hope some Americans can refrain from shooting their TVs over the transition phase.