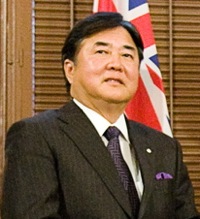 The province is getting a new Lieutenant Governor, and his name is Philip S. Lee.

Prime Minister Stephen Harper made the announcement Friday morning that Mr. Lee will serve as the next Lieutenant Governor of the Province of Manitoba. Harper said he consulted on the choice of Lee after speaking with Premier Gary Doer and Opposition Leader Hugh McFadyen.

“For decades, Mr.  Lee has played an integral role in Winnipeg’s cultural community and has been widely recognized for his efforts in promoting a positive cultural awareness among Canadians of all ethnic and cultural backgrounds.  As such, he is well prepared to assume this prominent role as the Queen’s representative in our province and will bring an exciting dynamic to this office,” Premier Gary Doer said in a news release Friday afternoon.

He was named to the Order of Canada in 1999 and is currently married with three daughters.

Lee will replace outgoing Lieutenant Governor John Harvard, as he comes to the end of his five-year term.