Rock on the Range Getting Back on Track After Wind Storm 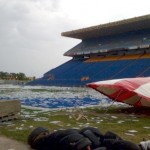 Last night’s wind storm destroyed the plastic flooring being laid down on the field of Canad Inns Stadium in preparation for Saturday’s Rock on the Range concert. As you can see to the right, debris was scattered absolutely everywhere.

Organizers called on volunteers to come down to the stadium earlier this morning to help put things back together. Those who stayed and lent their assistance for a minimum of three hours received two free tickets to the show. Not a bad deal for a few short hours of manual labour.

Kevin Clifford — who’s in charge of production for the concert — said everything should be back to normal shortly.