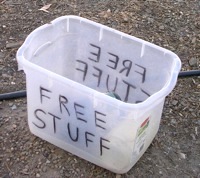 Mark September 26 and 27 on your calendar — those are the days the first ever “Giveaway Weekend” will take place.

Word from City Hall today is that the Mayor’s cabinet approved the pilot project first introduced by the Canadian Taxpayers Federation.

The idea is for residents to put out any used goods they no longer need out on the curb for others to come and pick up for free. This initiative is aimed to greatly reduce the clutter in our landfills.

“Unlike most other government run environmental programs, “Giveaway Weekends” help the environment without costing millions of dollars. The initiative doesn’t require the creation of a new bureaucracy and is a completely voluntary program. Clearly it’s a taxpayer friendly initiative,” Colin Craig, Provincial Director of the Canadian Taxpayers Federation, told ChrisD.ca in an e-mail today. Craig also said that compared with the provincial government’s $1 million e-waste recycling program, this initiative is a steal.

“The CTF recommends using corporate sponsorships and partnerships with media outlets to raise awareness of the program,” Craig added.

$20,000 will be spent promoting giveaway weekend, which will come from the city’s budget.