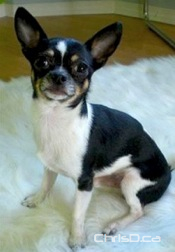 A Winnipeg woman is desperate to find her 5-year-old chihuahua after it was stolen on July 5. Lucius was last seen in the area between McPhillips Street and Cathedral Avenue, and is black and white in appearance.

The dog’s owner, Tracy, has contacted local media about the dog, but they don’t seem to be willing to help. Perhaps if a vehicle was stolen along with the dog, it would be a different story.

There is a $1,000 reward being offered and no questions will be asked in Lucius’ safe return. Anyone with information can call Tracy at 297-5435.

UPDATE: July 24, 2009 — The owners have been reunited with their dog, which was returned safely today.