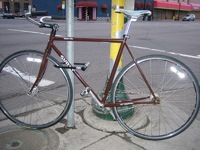 Perhaps Winnipeg could learn from Boston when it comes to getting the word out about stolen bikes. The Stolen Bikes Boston Community Alert was recently launched and uses both Facebook and Twitter to communicate recently stolen bicycles in the city. A description of the bike is provided and sent out immediately using both social networks. Schools, hospitals, bike shops and those who follow the initiative on Facebook and Twitter are all notified.

Citizens can then keep an eye out and report any sightings of stray bicycles they see throughout the city.

So far the city says the program is working and several bikes have been returned safely to their owners.