Gimli All Set for Icelandic Festival 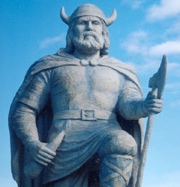 The August long weekend wouldn’t be the same without the Gimli Icelandic Festival north of the city. The four-day event begins today and runs until Monday, August 3.

As you may remember, a man was killed last year on Centre Street, and thus forced the RCMP to re-evaluate its operational plan for the 2009 festival. Sgt. Wes Olsen says there will be zero tolerance for open liquor, underage drinking and rowdiness in general. There will also be more foot patrols in high traffic areas.

The festival itself will be a hit, as always, featuring the Viking Encampment on Harbour Park Hill beginning today at 1 p.m. until 8 p.m. The majority of the action will begin on Saturday though, with a complete schedule of events listed on Icelandic Festival of Manitoba website.

My favourite part will be the pancake breakfasts each morning. Now hopefully the weather will cooperate.