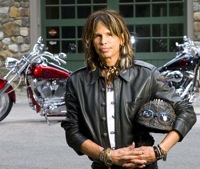 After suffering a fall from the stage at a show in South Dakota last night, Aerosmith frontman Steven Tyler is currently recovering. Tyler suffered minor head, neck and shoulder injuries.

Early Thursday, it was unclear if Friday’s concert at Canad Inns Stadium — which also features ZZ Top — would still be on or not. The show’s promoter later said that all Canadian dates are scheduled to go on as planned, BUT, that statement was later contradicted by stadium officials.

A press conference was held this afternoon and organizers are looking at three possible dates for the concert to occur sometime down the road. They say it will likely happen before the end of September. Winnipeg is the only show on the tour that has been postponed thus far.

As for tickets, hold on to them. They will be honoured on the new date.

Thanks to Jeff Kelly at CURVE 94.3