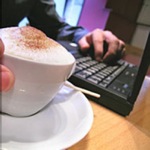 Some New York City cafés and coffee shops are booting customers that choose to use laptops. This comes shortly after multiple establishments shut down their wireless networks to encourage people to engage in conversation with each other and not hold up real estate for paying customers.

However, the new rules have annoyed some patrons, who have turned to the Internet to vent their frustration.  Some laptop users who have been asked to leave have even started up an online forum to share which coffee shops allow you to sit for hours and surf the Internet while only spending a few dollars on a beverage.

Winnipeggers shouldn’t have this same problem, as our establishments hardly see the same amount of foot traffic those in Times Square do. But if sitting and sipping on a mocha while checking Facebook isn’t for you, the City of Winnipeg offers other designated “hot spots” where free Wi-Fi is now available. The access code at all of these public locations is wpgwifi.