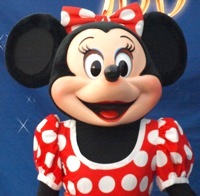 Here’s what not to do at Walt Disney World. A 60-year-old Pennsylvania man was convicted on Tuesday of groping a female performer in a Minnie Mouse costume.

John William Moyer told the judge he is innocent, but that didn’t change the fact he needs to write the victim an apology, serve 180 days probation and complete 50 hours of community service. He also has to pay $1,000 in court costs and might need to undergo a mental evaluation.

Minnie Mouse, I mean, er, the victim, said she tried feverishly to keep Moyer’s hands off her breasts.