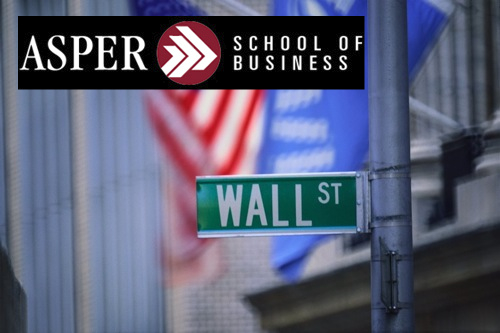 It’s always a big day on Wall Street, but it’s an even bigger day for the guests helping to ring the closing bell. Glenn Feltham, the Dean of the Asper School of Business, alongside students and staff, will ring the closing bell on the NASDAQ stock exchange later today in New York City.

Only two other universities — Rice University and the University of Texas at Austin — have ever had the privilege of ringing the bell.

“We’re in very good company,” said Rob Warren, I.H. Asper executive director for entrepreneurship at the Stu Clark Centre for Entrepreneurship. “We are among the North American elite.”

24 teams from the world’s best business schools competed in the Stuart Clark Venture Challenge, the largest business plan competition in Canada. The Asper School competed for the title and more than $40,000 in cash and prizes, and the right to close the NASDAQ exchange.