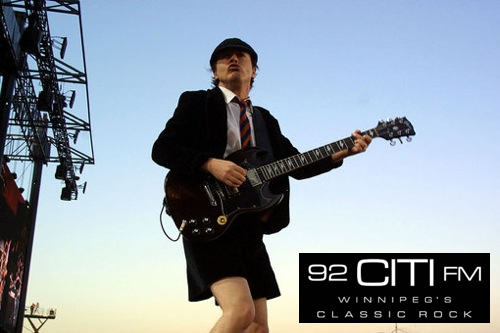 Rock station 92 CITI FM is attempting to create a Guinness Book World Record for the most Angus Young impersonators in one place. Awesome.

It’s all part of AC/DC‘s upcoming show at Canad Inns Stadium on Saturday night when they bring their “Black Ice” tour to Winnipeg.

As most diehard fans already know, lead guitarist Angus Young’s trademark school boy outfit is one of the most famous images associated with the legendary band.

Beginning today at 2 p.m. until 7 p.m., 92 CITI FM will broadcast live from the Tavern United Downtown (across from the MTS Centre). They’re asking all Angus Young impersonators to come down and show off their stuff. You’ll also have a chance to win tickets to Saturday’s show.

AC/DC tribute band “Whole Lotta Angus” will also be down at Tavern from 5 p.m. to 7 p.m.