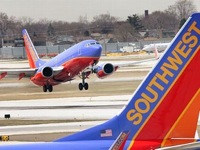 A Southwest Airlines flight was the setting for a scene nobody wanted to witness on Thursday. The plane travelling from Oakland to St. Louis was forced to return after a 300 pound male passenger stripped.

The 21-year-old man allegedly exposed himself and then sat next to a female passenger, at which time he proceeded to punch her in the face. You can’t make this stuff up, folks.

KTLA reports Darius Chappille is facing a number of charges.

Both him and the female victim were taken to hospital with minor injuries.

Meanwhile, Southwest was addressing the issue on their Twitter page yesterday afternoon.