Payback is Humiliating for Toronto Urinator 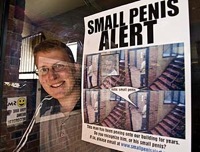 A building manager in Toronto is trying to humiliate the anonymous man who chose to urinate in his apartment’s lobby.

Manager Alex Hess pulled still frames from the surveillance video footage and made up several dozen posters with the man’s image. Since then, Hess has been going around town posting the face of the urinator with the words “small p*nis alert” in big bold print.

The police have not been involved, as Hess prefers to use old fashioned humiliation to discourage anyone from thinking about performing similar acts.

To view the poster and the actual surveillance footage, click here.