Home » Sports » “Pacman” Jones Will Not Play in Winnipeg

“Pacman” Jones Will Not Play in Winnipeg 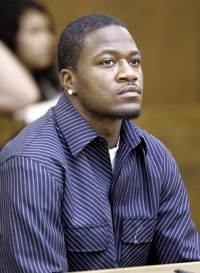 The Winnipeg Blue Bombers said late today that former NFLer Adam “Pacman” Jones will not be joining the team after all.

The news broke just after a video surfaced of Jones rambling on about coming to play in Winnipeg.

“It is unfortunate that this situation became public however our position has remained consistent. We will pursue athletes that we believe will contribute to our organization on and off the field,” head coach Mike Kelly said.

The 25-year-old has been surrounded by all sorts of controversy, which stem from several brushes with the law in the U.S. There were serious questions about whether he could even make it into Canada given his criminal record.

← Previous: 'Wheeler in the Morning' with Philly and Rena Jae Next: Pirates Will Dig Up Treasure for United Way →
Tags: CFL | Football | Winnipeg Blue Bombers