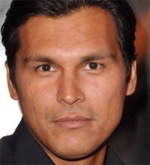 Winnipeg actor Adam Beach will be returning to your television starting Monday, September 7.

Beach, who you may also know from “Law & Order: SVU,” will star in a half-hour comedy called “Moose TV.”

The show will air on APTN and targets a 25- to 54-year-old Aboriginal demographic.

Other new shows on the network’s fall schedule include “In Focus” and “APTN Investigates.” Both feature original news programming.

Beach has an impressive resume of work, which also include stints on “Walker, Texas Ranger.” According to his IMDB page, he is currently working on a movie titled “Warrior,” where he plays Sgt. Major Duke Wayne.

For a complete synopsis of “Moose TV” visit APTN.ca