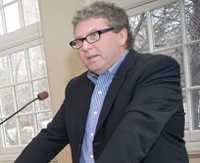 It could be 16 months or longer before construction begins on the vacant land once occupied by the Winnipeg Arena in St. James.

CBC News reported late Thursday that developer Shindico is holding off on its plans at the moment due to the sluggish economy.

Local businessman David Asper is relying on new retail development on the land to fund the future Blue Bomber stadium at the University of Manitoba. The city has a memorandum of understanding with Asper, which would see the current stadium sold to his company Creswin Properties. Money from the sale would be pumped into the $150 million sports complex in south Winnipeg.

Mayor Sam Katz agrees that right now is not the best time to move forward.

According to this article, an Asper spokesperson said an announcement regarding the development will be coming in the next few weeks.