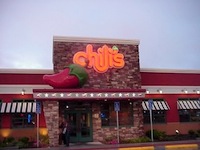 Four students in Vermont are facing charges after attempting to steal a giant chili pepper from atop a Chili’s Grill and Bar.

Cops showed up to the restaurant when an alarm was triggered. When they arrived, they found a 23-year-old man removing the bolts that held the pepper in place with an electric drill.

Attached to the drill was 470 feet of extension cord running from a nearby Home Depot, across a highway and up to the roof to power the tool. Cordless drill, anyone?

The restaurant says the pepper is estimated to be worth $8,000. The only damage that needed to be repaired was on the bracket that held the pepper in place.

The fixture weighs more than all of the suspects combined and can only be moved with the help of a crane. Where did they expect to take that thing?

That’s like trying to steal the big letters atop the Silvercity movie theatre. It’s just not gonna happen.