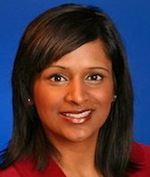 Another vacant spot will soon be left at Global TV.

Reporter Meera Bahadoosingh will be joining Andrea Slobodian over at Shaw, but not in Calgary. Meera has accepted a position with Shaw TV Winnipeg. They must pay well over there.

After being tipped off about Meera’s move, we checked it out and confirmed it’s definitely happening. Her last day will be September 29.

Good luck over there, Meera!

UPDATE: We’ve obtained a memo sent out from the news director to the Global newsroom:

“It is with regret that I announce the departure of two members from the Global News Team. Both Meera Bahadoosingh and Andrea Slobodian are pursuing other opportunities and will be leaving Global Winnipeg at the end of the month.

Meera Bahadoosingh first joined Global News back in 2005 on a casual basis. After some back and forthing with other stations in the market, she rejoined Global as a part time reporter, before becoming a full time newshound in the fall of 2007. Meera has become one the veterans in the newsroom, quarterbacking the live coverage of big national stories such as the police shooting on Jubilee Avenue and the Greyhound Bus Murder of Tim McLean.

Andrea Slobodian joined Global Winnipeg in the summer of 2007, first in a term capacity — but she quickly established her weather street-cred and we realized we needed her on a full time basis. Andrea charmed viewers — prompting one blogger to write “she’s like the girl next door…to your Baba.” Andrea was also integral in launching and maintaining “Heart of the City” and the Global Winnipeg Ground Force.

Please join me in wishing Meera and Andrea the best.”