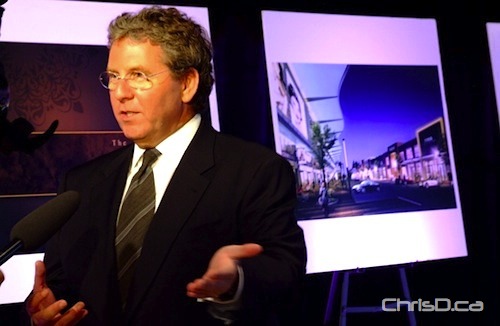 Winnipeg businessman David Asper and his company, Creswin Properties, were granted another year today to put together the retail development at Polo Park. Profits from the project will eventually fund the new Winnipeg Blue Bombers stadium at the University of Manitoba.

Ken Hildahl, Chair of the Board of Directors of the Winnipeg Football Club said the organization remains dedicated to construction of a new stadium at the University of Manitoba. “Both the Board and management are fully behind the Creswin proposal and are continuing to work hard on many different fronts to ensure it succeeds,” he said.

The Winnipeg Football Club and Asper announced letters of intent for the 650,000-square-foot shopping centre — which will be called The Elms Collection — to be anchored by two giant U.S. retailers on the old stadium property.

The names of the retailers were not revealed in the statement, but were referred to as “luxury retailers.” The Elms hopes to attract a wide variety of clientele from not just Manitoba, but Saskatchewan, North Dakota, northern Minnesota and northwestern Ontario.