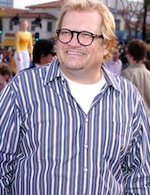 Drew Carey — comedian, actor and host of the “The Price is Right” — is currently on a mission to raise $100,000 for the LIVESTRONG Foundation, which helps people affected by cancer.

It all started on Twitter, when Drew Olanoff from LIVESTRONG asked Carey if he would be interested in bidding on his Twitter name, which simply happens to be @drew.

There’s no doubt that he will reach his goal, which will ultimately benefit the foundation in the long run.