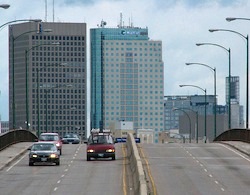 Forget about those rumoured traffic delays once the Disraeli Bridge goes under construction, because traffic should flow just fine.

Both the province and city announced plans this morning to leave the bridge — which 42,000 vehicles use per day — open while undergoing repairs.

Fears were that traffic would be snarled for up to 16 months while the crumbling freeway is fixed.

The province also announced it will increase its annual roads funding to the City of Winnipeg to $38.1 million in 2010 from $32 million in 2009. This will result in a $53.3-million increase over a 10-year period, eliminating the need to close the bridge.

The provincial funding will also contribute towards options with design lives of 75 years, ensuring that today’s investment has long-lasting benefits for the citizens of Winnipeg, Premier Gary Doer said.

Construction is set to begin in 2010.