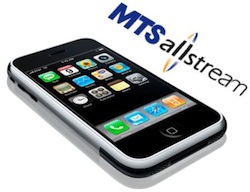 MTS customers hoping to pick up the Apple iPhone next month may have to wait a little longer. After this week’s announcement that Bell Canada and Telus Corp. would begin carrying the popular device in November, MTS Allstream didn’t say whether they have similar plans.

“MTS is currently working to deploy a new wireless network which will be launched next year, so it would be premature to speculate on any new handsets for that network. I can tell you that we are confident our current handset lineup does a great job of meeting our customers’ needs,” said Greg Burch, Director, Corporate and Employee Communications in an e-mail to ChrisD.ca. Because MTS’ current network is CDMA, the iPhone would simply not work on it. This means that if the new network will not launch until 2010, then you shouldn’t expect the iPhone to debut any sooner.


From a business standpoint, it’s not a wise decision for MTS to hold out even longer on bringing the iPhone on board. Potential customers who have had their eye on the device may have been waiting for another carrier, besides Rogers, to come along. Now that Telus will also be carrying it, they will most likely pick up a good portion of the new subscriptions in November, especially leading up to the holiday shopping season.