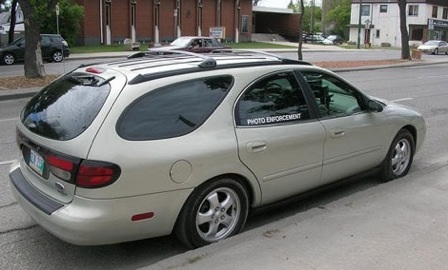 A group that warns motorists of photo radar locations had a run-in with Winnipeg police Tuesday morning on Ness Avenue.

Members of WiseUpWinnipeg.com had set up signs to warn motorists of an upcoming photo radar vehicle, but were warned by police that a charge of obstruction of justice could be brought forward for doing so.

Retired Winnipeg police officer Larry Stefaniuk — who spearheaded the website — said such a charge doesn’t make sense. Speaking with CBC News, Stefaniuk said, “From what I can understand, that would only come into play if somebody was standing in front of the radar unit, preventing it from actually performing its duties or say, if an officer was set up doing radar and somebody was acting in a manner that would prevent them from taking radar readings or laser readings.”

Last Saturday, WiseUpWinnipeg.com gave away dozens of free signs to motorists at the corner of Bishop Grandin Boulevard and St. Mary’s Road to help warn other drivers of upcoming speed traps.